Long before the Lakeside-Lester Park area even appeared on some city planner's board, the first 45 families of what was someday to be St. Michael's Church came together and met for Mass in the fire hall at Dodge Street and 51st Avenue East in 1914. Father Michael Boland came from the Sacred Heart Cathedral to say the Mass. That first community was then known as the Lakeside Catholic Church until its incorporation on August 4, 1915, when it became known as St. Michael's Catholic Church. Today the parish consists of about 500 families.

​In the fall of 1914, work began on a Church building at 49th and Pitt Street. As time passed, the community grew, and additional levels were added to the Church to serve as a school. St. Michael's School opened in 1923 and was run by Dominican Sisters from Springfield, IL until 1981. This building still stands today and now serves as the Lakeside Professional Building.
​
On April 25, 1955 groundbreaking began for the present-day Church and rectory, designed in a semi-modified Italian Romanesque style. In October of 1956, Monsignor Michael Boland, then vicar general of the Diocese of Duluth, laid the cornerstone for the Church and rectory. The new Church was dedicated on November 25, 1956 by Bishop Thomas A. Welch. The main altar of the Church was consecrated on December 6, 1956 by Auxiliary Bishop L.A. Glenn. The relics of St. Iranaeus, Bishop of Lyons, and St. Donatus, Bishop of Arezzo in the 4th century, were in the original altar and were placed back in the altar during the 2019 renovations.

Today, St. Michael's Catholic Church is a community dedicated to the beauty of the liturgy, the call to charity and service, and ongoing formation in our faith. Lead by Rev. Andrew Knop, OMI, the celebration of the Mass at St. Michael's directs the gathered faithful to the divine inspiration of the Word, the majesty of the Body and Blood, and our joyful response in worship.
​
St. Michael's community continues to be a sign of God's presence in the neighborhood and particularly bringing hope to those less fortunate through the involvement and support of CHUM (Churches United in Ministry) and their mission. 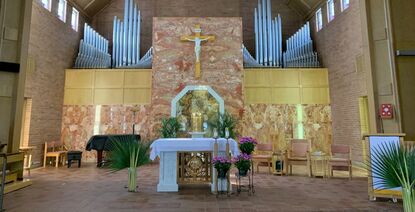